We are proud to have board-certified pediatricians and practitioners on our staff whom have vast experience and knowledge.  This allows us to better serve the medical and health well-being of you and your children.

Dr. Nevins was born and raised in the Adirondacks.  She received a bachelor’s of science degree in Biology and Psychology from Syracuse University in 1985.  She went on to receive her degree in medicine from SUNY HSC in Syracuse in 1989.  After completing her residency in pediatrics at Albany Medical Center, she joined Adirondack Pediatrics in 1992.  Dr. Nevins is the medical director for the Warren and Washington County Child Advocacy Center (CARE Center).  She is married, has two children, and loves to ski and play in the Adirondacks.

Dr. Nolan was born and raised in Glens Falls and graduated from a combined bachelor’s and medical degree program from R.P.I. and Albany Medical College in 1977.  She did her post-graduate training in pediatrics at the New York Hospital/Cornell Medical Center in NYC, and then did training fellowships in Adolescent Medicine and Pediatric Cardiology.  She was the first director of the Pediatric ICU at New York Hospital and director of the Pediatric Emergency Services at St. Luke’s-Roosevelt Medical Center in NYC from 1985-1987.   She has been in private practice in Pediatrics and Pediatric Cardiology from 1987 to present.

Dr. Meilhede grew up in East Greenbush, NY.  She graduated from Siena College in 2004 with a bachelor’s degree in Biology.  She then went on to obtain her medical degree in 2008 from SUNY Upstate Medical University in Syracuse NY.  She completed residency in pediatrics at Maine Medical Center in Portland, Maine and became a board certified pediatrician in 2011.  She came back to Upstate New York to join Adirondack Pediatrics in 2011 and has been here since.  When not practicing pediatrics, she is spending time with her husband and 2 young children getting hands-on parenting experience!

Dr. Tarello was born and raised on Long Island before going to the University at Buffalo for undergraduate and medical school education. While in Buffalo, he met his future wife, a Glens Falls native. After a brief detour back to Long Island for his pediatric residency at Winthrop University Hospital, he and his wife moved back to Glens Falls and he joined Adirondack Pediatrics in 2015. When not practicing pediatrics, he enjoys spending time with family and friends, and both playing and watching most sports (Go Buffalo Bills!). 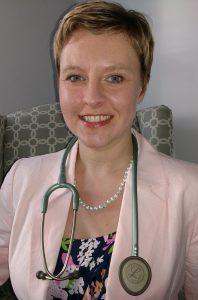 Dr. Kinsley is a Loudonville native, and received her bachelor’s degree in Biology from Siena College in 2004. She then went on to receive her medical degree from the New York College of Osteopathic Medicine in Old Westbury, NY. Dr. Kinsley completed a dually accredited osteopathic and allopathic residency at Winthrop-University Hospital and Good Samaritan Hospital, both located in Long Island. She is board-certified by the American Board of Pediatrics, and the American Osteopathic Board of Pediatrics. Dr. Kinsley has a variety of experience, having practiced medicine in both New Mexico and California. She resides in Glens Falls with her husband and son, and enjoys spending her free time outdoors with her family. 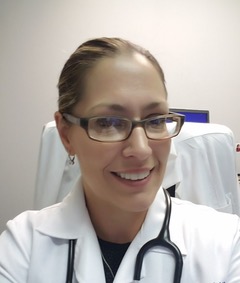 Dr. Theriot was born and raised in northern New Jersey and received her bachelor’s degree in Biology from The College of William and Mary in 1999.  She went on to receive her degree in medicine from Eastern Virginia Medical School in Norfolk, Virginia in 2004 where she became a member of the Alpha Omega Alpha medical honor society.  She returned to the NY metro area to complete her training and chief residency in pediatrics at Winthrop-University Hospital on Long Island and has been board certified in pediatrics since 2007.  After practicing and teaching for twelve years in academic general pediatrics at NYU Winthrop, she decided to move to the Glens Falls area, a region she’d fallen in love with years prior, to join Adirondack Pediatrics.  When not practicing pediatrics, she enjoys spending time with her family and two sons, travelling and exploring local cuisines, reading, and knitting.

Ann received her bachelor’s degree in nursing from the University of Rochester in 1988. She worked in pediatrics and cardiology before receiving her masters degree as a Family Nurse Practitioner in 1992 from State University of New York in Binghamton. Ann is board ceritified by ANCC and is a ceritified asthma educator.  She joined Adirondack Pediatrics in June 1993. Ann lives in Saratoga Springs with her family. She enjoys being a cub scout leader, sports, and Pop Warner first aid provider and spending time with her family.

Amy received her bachelor’s degree in nursing from Russell Sage College in 2006 and completed her master’s degree in nursing, with clinical training at Adirondack Pediatrics, from The Sage Colleges in 2010.  Amy joined the practice in the fall of 2010 as a full-time board certified Family Nurse Practitioner. Amy was born and raised in the Adirondacks and enjoys hiking and skiing locally.

Katie received her bachelor’s degree in nursing from Russell Sage College in 2005.  She worked primarily in pediatrics before continuing her education and obtaining her Master’s Degree from Sage Graduate School in May 2012. She joined our practice in August 2012 as a board certified Family Nurse Practitioner.  Katie lives in Wilton with her family.  She loves to travel and spend time with family and friends.